Adapted from Quick and Dirty Answers to the Biggest of Questions:

To fully appreciate how Cultural Maturity alters truth itself, we need at least a basic sense of the cognitive processes that produce Cultural Maturity’s changes. Creative Systems Theory has an ungainly (but precise) term for the result: Integrative Meta-perspective. A brief look at the process that produces this fundamentally new kind of perspective provides important insight.

Integrative Meta-perspective involves two, almost opposite processes. We see both of them, simply at difference scales of significance, with personal maturity and Cultural Maturity. The first produces greater awareness, a more complete kind of stepping back. The second produces the new depth of engagement needed if the result is to be not just further abstraction, but the deeply embodied kind of understanding that is needed for mature—wise—decision-making. Each kind of process is new, the first certainly in its implications, the second more fundamentally.

What we newly back from has multiple aspects and in other writings I tease apart the most important.

But the new relationship to intelligence noted earlier provides good illustration of the basic process. I’ve described how Enlightenment thought similarly had its origins in a new kind of cognitive orientation. Stepping back from previous ways of knowing was a big part of it. We came better able to step back from the more mystical sensibilities that had given us the beliefs of the Middle Ages.

Along with this more general stepping back, rationality came to have a newly central significance. The rational now stood clearly separate from the subjective aspects of experience and became specifically allied with conscious awareness. The resulting, as-if-from-a-balcony sense of clarity and objectivity, along with the new belief in the individual as logical choice-maker that came as a consequence, produced all the great advances of the Modern Age.

But while Enlightenment perspective was a grand achievement, Integrative Meta-perspective’s stepping back represents a different sort of accomplishment. With Cultural Maturity, awareness comes to stand more fully separate from the whole of our intelligence’s systemic complexity—including the rational.

The second kind of process is not just different from what we have known, it finds no parallel at all in earlier developmental changes. Along with stepping back, Integrative Meta-perspective engages who we are with a new depth and completeness. It involves a newly possible connectedness with the full complexity of human experience. The result is Cultural Maturity’s more complete, more embodied engagement with experience.

But for our purposes it works to keep things simple and continue to focus on intelligence’s multiplicity. What we more deeply draw on is the whole of intelligence—all the diverse aspects of how we make sense of things.

Culturally mature understanding requires the conscious involvement of more aspects of intelligence—more of our diverse ways of knowing—than before we’ve applies in one place.  This requires not just that we be aware that intelligence has multiple aspects, but that in a new sense we engage, indeed embody each of these aspects. Put in the language of systems, systemic perspective of a culturally mature sort requires that we consciously draw on the whole of ourselves as cognitive systems. Culturally mature understanding requires thinking in a rational sense—indeed, it expands rationality’s role. But just as much it requires that we more directly plumb the more feeling, imagining, and sensing aspects of who we are. And this is so just as much for the most rigorous of hard theory as when our concerns are more personal.

In a more limited sense we have always drawn on all aspects of intelligence. In doing a math problem, talking with a friend, or painting a picture, we tap very different parts of our neurology. But culturally mature understanding requires both a more aware relationship to our multiple ways of knowing and the ability to apply them in more sophisticated and integrated ways.

Note one important consequence of this new picture: Culturally mature perspective, while it produces less once-and-for-all kinds of truth than we have been accustomed to, is ultimately more objective than what it replaces. Enlightenment thought might have claimed ultimate objectivity, but this was in fact objectivity of most limited sort. Besides leaving culture’s parental status untouched, it left experience as a whole divided—objective (in the old sense) set apposed to subjective, mind set apposed to body, thoughts set apposed to feelings (and anything else that does not conform to modernity’s rationalist/materialist worldview). We cannot ultimately claim to be objective if we have left out half of the evidence.

Culturally mature “objectivity” is of a more specifically whole-ball-of-wax sort. Making sense of most anything about us—the values we hold, the nature of identity, what it means to have human relationship—today increasingly requires systemic understanding.  Integrative Meta-perspective helps us appreciate just why this might be so. It also helps us recognize how such more mature and complete understanding might be an option. 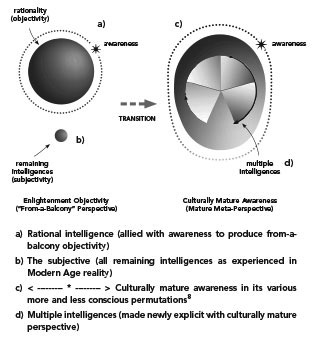