Excerpted from Quick and Dirty Answers to the Biggest of Questions

The most precise language for talking about where Integrative Meta-perspective takes us draws on the concept of systems. Systems thinking emphasizes the need to consider all the pieces; that connections are as important as differences; and how, when what we are considering is in fact a system, the whole ends up being greater than the sum of its parts.

We can use systems language to frame most any culturally mature challenge—from the most personal to the most encompassing.

Moral decision-making in a world without cultural guideposts requires a new ability to take all systemic factors into account. Identity beyond Cultural Maturity’s threshold requires that we include all the diverse aspects of our makeup (a recognition reflected in the need to more consciously acknowledge intelligence’s multiplicity). Leadership requires increasingly that we move beyond the mythologizing of authority and engage leaders simply as people with tough jobs (as whole beings). Culturally mature love requires that we move beyond making the other our brave knight or fair maiden and, in a fundamentally new sense, love as whole people. And relationships between nations require that we surrender past notions of “chosen people” and simply appreciate our systemic differences and similarities. On all these fronts, making effective choices in the future will require what Creative Systems Theory calls Whole Person/Whole System formulations of identity, relationship, and truth.

But systems thinking as conventionally conceived cannot help us as much as we might hope. Most systemic thinking confronts a critical obstacle when it comes to the kind of understanding the future will increasingly require. Until very recently, our systemic models, even for ourselves, were, mechanical models. Conventional systems ideas appreciate intricacies and interconnections, but the assumptions are most often those of a machine world. Even when the system of interest is a human body or an ecosystem teeming with organisms, the language remains that of a good engineer—hydraulics and forces, gears and pulleys.

A closer look at this “life” conundrum brings important detail to the challenge that confronts systemic thinking and any effort at culturally mature conception. It also highlights the multiple ways systemic thinking can go astray and the particular significance of a creative frame.

The “life” conundrum holds within it a more specific quandary:  How do we think about difference if our ideas are to that honor the fact that we are alive. Creative Systems Theory calls it the Dilemma of Differentiation. The simple fact that culturally mature truth requires that we make distinctions puts us immediately in a pickle. Differentiation, the ability to say “this as opposed to that” is ultimately what makes thinking work. But usual ways of addressing difference leave us short of the required dynamism. We can fall off the road in two opposite ways when it comes to the Dilemma of Differentiation. We encounter both kinds of traps with advocates of systemic thought. Systemic understanding is unusual for the diverse—even opposite—worldviews it can be used to justify.

The most obvious kind of trap is that previously noted. Thinkers depict difference in traditional parts terms—that is, in an atomistic, mechanistic manner. Such systemic formulations can be highly detailed, but no matter how subtle and sensitive our delineations, when we put the parts together, we end up back in a machine world.

Less often we encounter an opposite, yet just a deadly kind of trap. More popular writers who use systems language—particularly those of a more humanist or spiritual bent—may largely ignore parts and focus only on relationship. The result is ideas that reduce, in the end, to elaborate ways of saying “all is one.” Recognizing connectedness can be comforting—and it identifies a truth just as important and accurate as the “all is many” claims of atomistic or mechanistic belief. But begging the question of parts makes for impoverished conception at best. Worse, it makes for misleading conception. Real relationships (unity in the systemic sense we have interest in)—whether personal or conceptual—require difference. Certainly life does.

A defining characteristic of culturally mature thought is that it effectively addresses the Dilemma of Differentiation. Success at this task follows directly from where Integrative Meta-perspective naturally takes us. We see hints in my earlier observation that culturally mature understanding “bridges” conceptual polarities. The most fundamental of polarities doesn’t appose one conclusions and another; rather is juxtaposes separateness and connectedness.

Because in some way this most fundamental of polarities is reflected in every more specific juxtaposition, any concept that effectively bridges conceptual polarities at least begins to address the Dilemma of Differentiation.

We see more explicitly how success at addressing the Dilemma of Differentiation follows naturally from an Integrative Meta-perspective by looking to the diverse ingredients that Integrative Meta-perspective’s encompassing vantage helps us engage. For example, we catch a glimpse of this result in the way each our various intelligences approach questions of distinction in wholly different ways. I find a simple—but, in fact, ultimately quite sophisticated—image particularly helpful for representing this more complex creative result. Take a box of crayons. We can think of the needed more dynamic systemic understanding as what we get when we consciously and effectively use the whole box. The box represents the needed more expansive awareness; the crayon’s diverse colors signify the new and deeper engagement with life’s multiplicities. 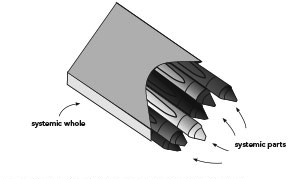 Whole-box-of-crayons perspective offers that we might see beyond black and white—and even shades of gray—and draw consciously, in timely and appropriate ways, on the whole rich complexity of hues we manifest by virtue of being human. In so doing, it directly reconciles our Dilemma of Differentiation. Difference—represented by the separate crayons with their distinct hues—and connectedness—represented by the colors’ generative interrelatedness—each have equal significance. Cultural Maturity’s cognitive changes make such whole-box-of-crayons perspective newly possible. With time they make it common sense.

We can apply this picture to the previous chapter’s assertions about the importance of stepping beyond the protections that have before been supplied by ideology. A simple—but not simplistic—way to think about ideology is to describe it is what we get when we take one crayon in our systemic box and make it last-word truth. That can be any sort of crayon—political, religious, gender- or temperament-related, philosophical. Giving one crayon elevated status distorts reality. But it also protects us by keeping complexity’s larger picture at arm’s length.. Placed in this frame, Cultural Maturity’s task becomes learning to think, act, and relate from a place that draws on the entirely of our whole-box-of-crayons inner makeup, and engages in and understands the world with a similar kind of “living,” systemic completeness.

That our box-of-crayons image has specifically creative implications should not surprise us given my claims for how Integrative Meta-perspective alters experience and what the use of the word “living” ultimately points toward. A creative frame offers a less pictorial, more conceptually rigorous—and also potentially more highly differentiated—way to address the Dilemma of Differentiation. Creative Systems Theory’s developmental/evolutionary approach illustrates the success of this approach when applied to difference over time. Later we will look at how we can use a creative frame to make analogous more here-and-now “living” distinctions. A creative frame lets us make highly detailed distinctions and have our identification of difference increase, rather than diminish, our appreciation for our dynamic “living” natures. As far as difference and connectedness, notice how creative stages are, without contradiction, at once discrete, and aspects of larger generative entireties. We find a related “third option” beyond mechanistic difference and connectedness as unity in all creatively framed formulations.

A creative frame provides not just one example of an approach able to reconcile the Dilemma of Differentiation, but, arguably, a particularly significant example. With regard to ourselves, at least, it may provide something quite precise. The foundation of creative perspective lies with what makes us not just alive, but the particular kind of life we are by virtue of being human. Integrative Meta-perspective, just by how it works, produces an explicitly creative picture of our human functioning.

Can we extend this observation further? Do we appropriately think of biological life and existence as a whole as ultimately creative? In a sense, perhaps (a future topic). But such conclusions leave us very close to common conceptual traps. Certainly we must take care that we don’t simply project our time’s new cognitive mechanisms as Enlightenment perspective did with rationality and its presumed mechanical universe. Better we say simply that whatever strategy we apply, it has to accomplish similar ends.